How Adjusting The Office Thermostat Can Save You Hundreds 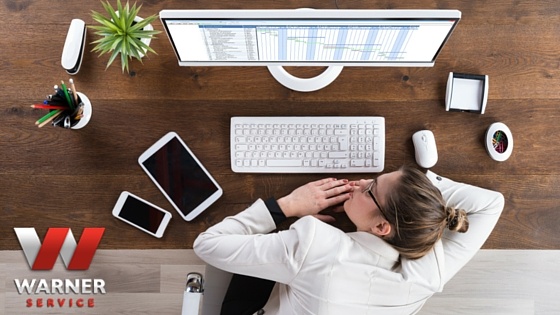 Did you know that the majority of ergonomics (the study of people’s efficiency in their working environment) research has shown that the optimal temperature for prime effort in the office between 70 and 73 degree Fahrenheit? However, Cornell University came to a different conclusion.

In 2004, a group of researchers conducted a month-long study in the Insurance Office of America headquarters in Orlando, Florida, to find out once and for all at which temperature employees work best.

When employees are warm, they make fewer typing errors.

“At 77 degrees Fahrenheit, the workers were keyboarding 100 percent of the time with a 10 percent error rate,” said Alan Hedge, professor of design and environmental analysis and director of Cornell’s Human Factors and Ergonomics Laboratory, to the Cornell Chronicle.

When the office temperature increased from 68 to 77 degrees Fahrenheit, typing errors fell by 44 percent and typing output jumped 150 percent. The results of the study also suggested the adjusting the thermostat to “warm” saves employers about $2 per worker, per hour.

So, what happens when it's cool?

It could increase a worker’s hourly labor cost by 10 percent. At 68 degrees Fahrenheit, the keyboarding rate went down to 54 percent of the time with a 25 percent error rate, leading Hedge to believe that “temperature is certainly a key variable that can impact performance.”

Cornell Isn't The Only Study

Cornell’s study isn’t the only of its kind. A 2006 study published by the Helsinki University of Technology, Laboratory for Heating Ventilating and Air Conditioning in Finland and the Lawrence Berkeley National Laboratory Environmental Energy Technologies Division in Berkeley, California, agreed. So did Harvard University’s research in 2010.

Researchers at the University of California, Los Angeles have a forthcoming paper that explains how “brief exposure to warmer temperatures leads people to report higher job satisfaction.”

This is due to the brain’s insular cortex, which senses temperature and perceives trust and empathy when activated by physical warmth. The opposite is also true, leading experts to believe that warmer environments create overall happier employees.

What This Means For Your Office

All of these ergonomics studies conclude that a few degrees difference can have a 5 percent or higher degradation in productivity, so dialing in the perfect thermostat setting can have a huge impact. With the help of About Home, the scale goes like this:

It’s wise to take into account the age, weight, and clothes of an employee as well as the office’s location, which can affect humidity levels and seasonal changes. However, no matter the business, the U.S. Occupational Safety and Health Administration’s subsection of its technical manual recommends temperatures ranging from 68 degrees to 76 degrees Fahrenheit.

In conclusion, great workplaces are a product of many factors. They require organized policies, a positive work culture, and hardworking employees. However, we often overlook that the environment has a huge role in how we operate, even in the workplace, so next time you want to crank the A/C, think about the office productivity levels first.

If you want Warner Service to take a look at your office’s thermostat, click below to contact us for a scheduled visit.